Please enable javascript in your browser to view this site!

Join us at the next TRJ-South monthly meeting to connect with other Berkshire community members working to advance racial equity and justice throughout the county and beyond.
TRJ-South County
First Thursday of Every Month
6:30 pm - 9:00 pm
UUMSB, Housatonic, MA
​
Please note: Due to COVID-19, TRJ-South currently meets over Zoom.
Please email RSVP@multiculturalbridge.org to RSVP 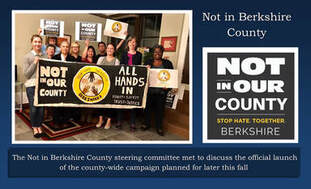 Meetings usually include a reading, group discussion and/or caucus report backs with an exploration of opportunities to get involved with current and ongoing TRJ and partner campaigns for racial justice.

TRJ-South and Race Task Force have adopted the following definition of RACISM (adapted from the PISAB): White Privilege + Economic & Social Power/Access + Racial Prejudice, and use the following systemic analysis on race and equity: Individual, Interpersonal, Cultural and Institutional to dismantle the political construct of race. The core values for this work are: trust, safety, and accountability in relationships, working towards transformation and liberation for all.
​
For more information please contact us at adminsupport@multiculturalbridge.org or call us at 413-394-4029.
​

In addition to the community TRJ-South meetings, BRIDGE supports, hosts and facilitates a number of break-out affinity groups for racial justice through the TRJ Caucus model. Women of Color Retreats and People of Color Caucus Retreats happen at our sister organization Harmony Homestead. Women's Caucus and Women of Color Caucus also take place at our bimonthly Women To Women leadership, development and support groups established in 2009. The TRJ People of Color Caucus, TRJ Men's Caucus for Racial Justice and TRJ White Caucus for Racial Justice meet every other month, with BRIDGE facilitators' support and education on the intersection of identity in racial justice work.

BRIDGE also holds TRJ monthly Accountability meetings, which grew out of the Caucus model, in particular in relationship with and evolution of Berkshire SURJ (see below), and the need to hold space to account for extraction, harm, and damaging aspects of white supremacy culture. The Accountability group also supports accountability within BRIDGE spaces such as board, staff and programs while network building and organizing through TRJ.

Join us at a TRJ-South meeting to learn more and get connected to the Caucus groups and Accountability.

​TRJ White Caucus and B-SURJ
TRJ White Caucus also functions as the Berkshire SURJ chapter, which BRIDGE initially called to form with an accountability relationship to BRIDGE in 2016, and which now exists within BRIDGE's ongoing organizing work and caucus model. White folks organizing other white folks for racial justice without following the leadership of People of Color in accountable ways undermines the work, inflicts harm, and upholds systems of oppression. This is learning that comes from extensive coaching and support from BRIDGE. Current members and facilitators of TRJ white caucus who were involved in the founding of Berkshire SURJ now recognize and are still working to account for and repair the harm caused when organizing without direct accountability. You can read more about the history of Berkshire SURJ with BRIDGE, as well as the process around engaging with the larger SURJ network and the work to acknowledge and repair harm caused to local POC-led organizing, here: